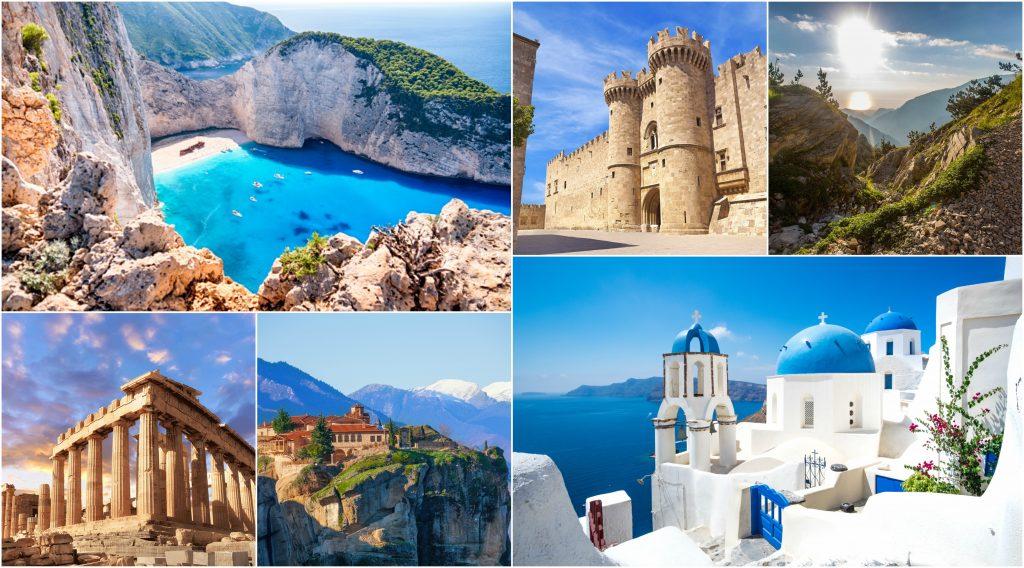 You know the feeling when you find a place you can’t wait to tell people about. Somewhere you know everyone should visit at least once. Because hearing about it is pretty special but seeing it is something else. Well, because Greece is more than we were thought at school and then we have seen in the photos with beautiful sunsets and golden beaches, here are top 10 places to see in Greece, country of beautiful contradictions.  In Greece the succession of images is not just our imagination, it is a sheer reality.

The Acropolis of Athens

Standing proudly above Athens – and at the top of our list – is the Acropolis, the Sacred Rock (as it’s known to Greeks) that’s been watching over Athens for the last 2,500 years.

From the top, its mesmerizing view has been a source of inspiration for many foreign travellers, poets and writers during the 18th century. Prior to this and because of the Ottoman occupation, travelling to Greece was difficult and Athens remained somewhat of a mystery to the outside world.
The ancient city of the Acropolis includes the Parthenon, the Erechtheion, the Temple of Athena Nike and the Propylea. On the northwest of the Acropolis stands the Areopagus (the Rock of Ares), which served as the high court of appeal for criminal and civil cases, during classical times. These days, it’s used by many to relax and enjoy the view. 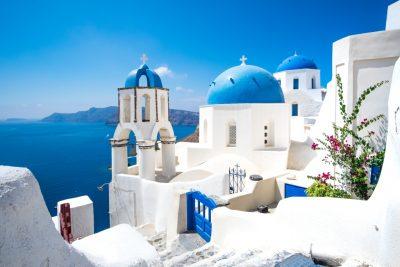 The S word! Santorini is the best romantic holiday destination all over the world. Luxury whitewashed houses perched on caldera cliffs with extraordinary views to Aegean Sea, mesmerizing sunrises and sunsets and a wide range of romantic activities are some reasons why this volcanic island is so popular.

If you’re a fan of anything wine related, then consider a visit to Santorini, and specifically a Santorini winery. After all, the volcanic island is home to some of the oldest vineyards in the world.
Eternal Santorini is also well known for its breathtaking sunsets. Head to the Caldera in Oia for some of the best views of the island, sea and sunset beyond.

Being famous as one of the most beautiful beaches in Greece, Navagio Beach is located on the North-West Coast of Zakynthos Island. This isolated sandy cove is famous as the best-photographed beaches in Greece. Originally, Navagio Beach was known as Agios Georgios but nowadays it owes its new name to the shipwreck of a boat that transported illegal cigarettes, in 1983. The ship was washed ashore.

With the years passing, the sand completely surrounded the ship which looks now as it emerges from it. The vestiges of the ship can be seen in the middle of the large white sandy beach which has amazing turquoise and crystalline waters. Huge vertical cliffs of white rocks are surrounding the sand creating a unique and enchanting image. To reach this paradise, one has to take a little boat from the small port of Porto Vromi. These taxi boats are leaving every hour and the trip is about 30 minutes.

The Palace of Knossos – Heraklion, Crete

Minoan myths, palatial splendor and details of everyday life and artwork from almost 4,000 years ago… visiting the Palace of Knossos is humbling in its significance.

To visit the Minoan Palace of Knossos is to travel to the depths of European history. The oldest civilisation in Europe, the oldest throne in Europe, the legends of King Minos and the Minotaur, and even artwork that continues to inspire today. The reasons to visit an archaeological site synonymous with Crete are so plentiful that it is a place that barely needs introducing. 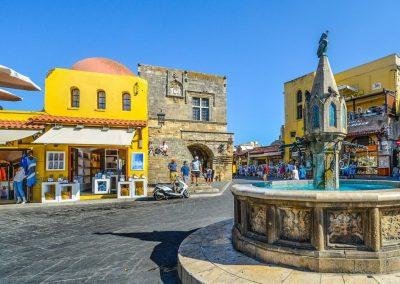 Imagine stepping into a world of chivalry and knights, with castle walls and lamp-lit, cobblestone streets. Now bring that city to life and you have a unique settlement on a unique island.

Rhodes Old Town has been a UNESCO World Heritage Site since 1988 but it’s not your classic heritage spot. The streets are so atmospherically medieval and well preserved that you half expect an armoured knight on horseback to ride past at any time. That’s before turning into the Ottoman or Jewish districts. And all with an unmistakably Greek vibe.
There are many shops, particularly around the central hub of Hippokratous Square. But there are also quaint and quiet alleyways, adding to the charm of a town that is (almost) car-free.

Another old town but on the other side of Greece. From Venetian fortresses and British mansions to stately palaces and French esplanades, a walking tour around Corfu’s Old Town is like exploring an open-air museum.

The Byzantines, Venetians, French and British all ruled over Corfu. The result is a unique history that lives on through all the churches, palaces and squares and the architecture of the buildings located between the two Venetian fortresses of the Old Town.
It’s a cultural and artistic heritage that can be felt everywhere. Not just in the cafes, tavernas and trendy bistros and along the pedestrianized little roads called “kandounia”, but in the art and music for which Corfu is famed and in the spirit of the locals going about their daily lives.
The entire Old Town is a UNESCO World Heritage Site, with an authenticity and romance that will leave you completely charmed.

Pillars of rocks sculptured by prehistoric rivers and crowned by otherworldly monasteries, monuments to the power of faith.

Meteora means ‘suspended in space’. Your first, second and third sight of these impossibly tall, vertical rocks will have you gasping in disbelief. But it’s not just the incredible geology that stretches your imagination. It’s the monasteries balanced on these pinnacles. How did they get there? The monks who built them were the original rock climbers, lifting the materials up with pulleys, nets and their bare hands.
Today, fans of the sport come to Meteora from the world over, to pit themselves against these gigantic rocks. UNESCO has declared Meteora a World Heritage Site. The Greek state calls it a sacred spot, inviolate and immutable. You’ll no doubt come up with other adjectives to describe Meteora, this wonder of the world.

A UNESCO World Heritage monument, nature at its grandest and the famous oracle… The gods still reign over Delphi.

In Delphi, the harmony that bound men and their gods is still apparent. Photographs cannot do justice to the grandeur and serenity of the setting. Nor can words express the emotions that this holy place provokes. The eagles, dispatched by Zeus to find the center of the earth, met here, at Delphi. This is where the god Apollo founded his sanctuary when he killed the dragon Python. The most renowned oracle in ancient times was located in this corner of Central Greece.
Here you will bow to what men and nature made together, a creation beyond place and time. You’ll discover your deeper self, as the power of human potential and divine energy resonate in you. And you will leave with prophecies of your own. 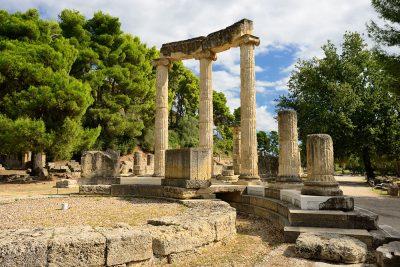 One of the most glorious sanctuaries of the ancient world, the birthplace of the Olympic Games is a cultural rite of passage in the Peloponnese.

There aren’t many cultural landmarks that you have a feeling for without having visited. The archaeological site of Ancient Olympia is one of them. Capturing all the spirit of the Olympic Games, it’s also the place where the Olympic flame is lit in commemoration of the Games that originated and were held here every four years for a staggering 1,000 years.
Located in the western Peloponnese, Ancient Olympia was one of the most sacred and glorious sanctuaries of the ancient world. And, though only foundations of many of its structures remain, it is still one of the most evocative of Greece’s archaeological sites.
Ancient Olympia strikes that magical balance of appealing to both children and adults in equal measure. You can still feel the spirit of the athletes and the adulation of crowds chanting their names (women and slaves from a nearby hill, of course). And, next to that, the veneration of worshippers in the remains of temples dedicated to Zeus and Hera. 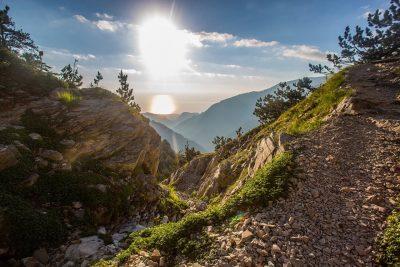 Whether you want to conquer the home of the gods or gently hike through divine nature, Mt Olympus stands ready to greet you.

It’s not for nothing that the ancient Greeks chose Mt Olympus as the seat of the 12 gods. Greece’s highest point has always attracted a sense of awe – as much for its rich wildlife as the mystery of its ravines, caves, plateaus and mist-covered peaks. Where better for Zeus to settle as lord of all the gods, demigods and humans?
And humans, in turn, were quick to show their reverence. Mt Olympus was made Greece’s first National Park and has been incorporated into the E4 hiking path, allowing us all to enjoy the views from its many peaks and folds, along with some of the 1,700 types of plant and animal found on its slopes.
You certainly don’t have to reach the full 2,917m to Mytikas, the legendary Throne of Zeus. There are various routes you can follow, either with a guide or on your own. And the most popular is the first stretch, along the beautiful Enipeas Valley, from the foot of the mountain to one of the refuges.
The terrain, climate and vegetation change as you ascend. From oaks and low-lying shrubs, to deciduous trees and black pine and firs – including the rare robolo tree (or Bosnian pine) – until you rise above the treeline at 2,500m with low-lying vegetation and, in the spring, an expanse of wildflowers.

So there we have it…. An epic tour of 10 incredible destinations in Greece. There’s history, iconic islands, grand nature and no fewer than six UNESCO World Heritage Sites to choose from. And… we didn’t even make you get up from your sofa. For now. 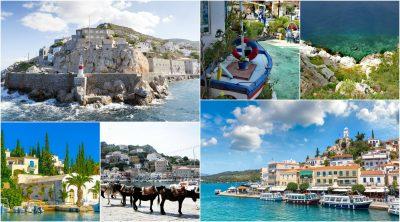 The Saronic islands are very popular Greek islands for summer holidays and weekend breaks. This is because 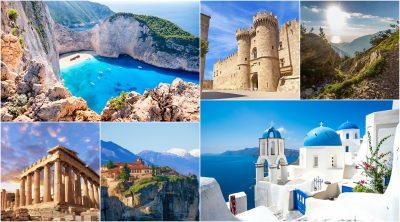 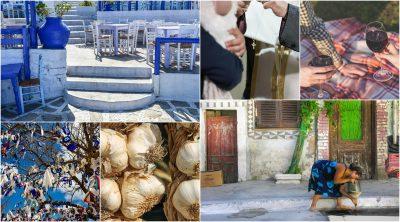 Roots, places, manners and customs in Greece. Travel to a civilization with a long history